‘Don’t let it define you’

As a singer, dancer and writer, Yammie Fishel is an inspiring example of what it means to thrive while coping with a mental health condition.

The 28-year-old Belgian was diagnosed with schizoaffective disorder when she was 17. This is a chronic condition with symptoms of schizophrenia, like hallucinations or delusions, together with symptoms of a mood disorder, such as mania and depression. She experienced the first symptoms at the age of six, when she began hearing voices and seeing colours and figures floating through space.

“Don’t let it define you, because although it has a really big impact in your life, it’s not who you are and it shouldn’t stop you from doing the things you love and the things you dream about,” she said.

Yammie’s online musical presence is a testament to her unique voice and talent. Yet singing is more than a hobby — it helps her navigate some challenging emotions at times.

“If I’m unwell or scared or sad, I try to pick out a song that has a bit more oomph, a bit more volume and I try to literally give myself a voice again — singing,” Yammie said. “It’s very grounding.”

Picking up ballet dancing took a lot of courage, mostly because it also meant being social. She was afraid she would be judged.

“In my mind, it feels like you can sometimes read right on my face ‘She has been in a psychiatric hospital or she has problems,’” Yammie said. “But then I realised if I go to dance, then I’m a ballet dancer. That gives me a whole new role and a new identity, which makes me feel very comfortable.”

She also recently began experimenting with fiction writing, which she sees as another outlet that allows her to express herself and her thoughts.

But things aren’t always easy. During moments of anxiety or depression, comparing herself to others can be especially daunting.

“When I look at my peers, people getting married, people having children, people going off to college… It makes me question why? Why am I not doing all these things? Why am I in a hospital?” she said.

Yammie has weekly appointments with therapists and psychologists as part of her regular care. During last year’s lockdown, Yammie had a relapse, which saw her twice back in the hospital under careful psychiatric care. ‘Relapse’ is a word Yammie does not like. 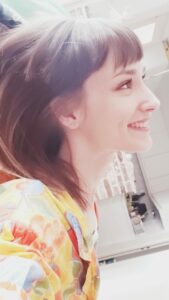 “It has such a negative connotation,” she said. “You have a setback, yes you do. You can fall, but you get up again. You got up previous times and you’re still fighting. A relapse for me means you’re back from where you started — but you’re not. You’ve grown throughout the years, you’ve got your own experience.”

When it comes to medication, Yammie said it’s also important for patients to feel they can decide what and how much is good for them, even if that means going through some challenging moments.

“I’m not here to promote quitting taking medication,” she said “I want to say to family, friends, loved ones and doctors to give [patients] the space to experiment. They need to figure out for themselves whether it works or not.”

Although there were moments when she felt she had lost faith in herself, Yammie said she’s proud “that she’s still going and still working” on herself.

Her advice to people recently diagnosed with a mental health condition is to seek help, not only to professionals but also to support groups. “Don’t isolate yourself,” Yammie said, adding that it’s important to be surrounded by people who make one feel secure and trusted.

“They’re really not alone in this, there are many people who suffer,” she said. “I don’t think suffering should be a common thing, not at all, but when we act normal about it, it doesn’t make you feel so weird.”