“I was starting a new life.”

Ricky was in his early 30s when he first got fired from a job. He was often absent and unable to perform his duties, which took a toll on his professional life. He got fired three more times from other jobs in the years that followed.

Everything was confusing because he had done so well during the interviews.

“I was always in a hypomanic period when the interview took place” Ricky said, reflecting on his earlier years before he knew what he was experiencing. “My interviews were really excellent, I was really expressive, I could explain everything and could speak four languages.”

But then a mood slump would follow, which could lead to several weeks of underperformance.

Mood changes started happening when he was about 15 years old, said Ricky, who lives in Belgium.

“I was going on bike rides on my own for about two hours from one place to another, I already started asking questions about life, sometimes I was already a little depressed and it was a little bit strange that I was not really happy,” he said, adding that he felt different from the rest.

The ups and downs got worse during his university studies and the years that followed, reflected through deep depressive states mixed in with “fantastic periods when I could do everything” — but still no diagnosis. The undiagnosed mood swings, which bordered suicidal thoughts at times, also ended up in a divorce.

“I didn’t know what all this was,” Ricky said. “My GP said, ‘No, no, if you go to a psychiatrist, they will go into depth into what you’ve been experiencing, into your youth and trauma and that will be very heavy.’”

Still, Ricky was keen to find answers. After reading through the comments and experiences of many people online, he put a self diagnosis: bipolar disorder. This is a condition associated with manic highs and depressive lows that can last from days to months. A psychiatrist confirmed it and he began getting the help and medication he needed.

“I was starting a new life,” he said.

Around the time of his diagnosis, Ricky was also in a relationship that lasted 10 years. His partner passed away in 2011 after first battling cancer and then leukemia — a traumatic event that left Ricky in a deep depression. But there was still a lot of good to embrace.

“She changed me, my life, my views,” he said. “She was very positive until the end when she died. And this also gave me a click and I said I don’t want to go through so much stress, I want to have a good quality of life, without any more work-related pressure.”

Ricky then left Brussels, moved to his hometown and became a freelancer. He became interested in patient organisations and gained experience talking to peers and writing self-help guides, which he said was key in his recovery. 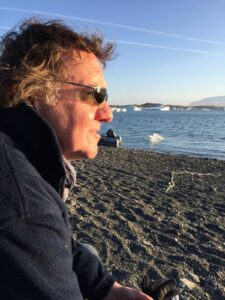 “You feel you’re not the only one, there are other people who deal with bipolar disorder,” he said. “You see some similarities in the problems and then you learn from other people. After a while, you can exchange roles and you will provide more information to other newcomers.

Ricky enjoys driving his motorbike along winding roads with nature around. “The point is that you cannot think about anything else anymore, you have to watch the roads and you are really focused on what you are doing.”

Even though there’s days when he feels depressed and it’s hard to get out outside, Ricky said he always tries to push himself to get some fresh air, because he sees the benefits right after.

“That’s the tip that I want to give to people, although it’s so difficult from time to time,” he said. “Take your time, take all your courage, take all your energy and go out even for 10 or 15 minutes. It’s so important. Some people don’t have that reflection, they think ‘Okay, I have to stay in bed now.’”

The other tip? Make lists of what you have accomplished during the day.

“I think that’s something many people don’t think about: to give themselves a kind of reward,” he said.

It doesn’t have to be big things. Simple chores like cleaning the room, cooking, eating a warm meal can show the day has been well spent.

“I cannot say to myself ‘I’m worthless,’” he said. “It gives a kind of appreciation to oneself.”