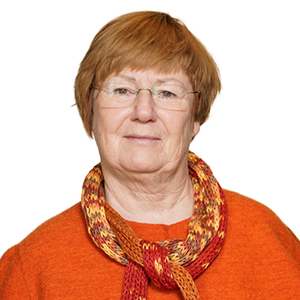 Simone Gynnemo always knew something was wrong. Yet it took decades to hone in on what was causing her mood swings and affecting her quality of life.

The main reasons? Family influence and stigma, which kept Simone struggling for a good part of her adult life. But as the saying goes: better late than never — and the Swede is a great example of how life can turn around.

Simone, now in her early 60s, was diagnosed with bipolar disorder 12 years ago. This is a condition associated with manic highs and depressive lows that can last from days to months.

“I was always thinking that my mood changes had to do with my experience, with how I was brought up, that I was a very sensitive child,” she said. “I was very lonely with this and I started to act out more and more.”

Simone got married and had a child “very early on,” and moved to Texas with her husband, who often had to travel. This left her struggling to deal with her moods in a foreign country where English was not her native tongue. She even tried to take her own life.

She found some comfort in religion and Christian symbols, which she said allowed her to learn to accept her situation and move on with her life. Ten years later, she returned to Sweden, divorced her husband and moved into a quieter region of the country.

“But I continued my way of living dangerously,” she said. “I was driving too fast on very small roads, swimming alone when the stream was fast, drinking too much — and I started to be very depressed.”

Eventually, she saw a doctor that sent her to a psychiatrist who diagnosed her with bipolar disorder.

“I felt such a relief knowing what this was and that it has nothing to do with my intelligence or anything like that, it’s a chemical issue,” she said. “Now I know why this is happening to me.”

It was easy to adjust to the medication, Simone said, which helped her and didn’t impact her ability to feel happy or sad. She also created a routine for her day, which helps her feel more grounded.

Looking back, Simone said her mother always discouraged her from seeking professional help.

“My mother had always told me not to go see any psychiatrists, that they are dangerous,” she said. “I think that she didn’t want her beautiful, intelligent daughter having a disease with so much stigma around.”

Even decades later, when her mom was in her 80s and Simone had received her diagnosis, her mom’s views had not changed.

“She would not really accept what was going on, she would just say ‘drag yourself up, just take a new step,” Simone said. “I found that very, very hard – that she thought she knew me a lot better than I did myself.”

After her mom passed away, Simone found out that others in her extended family suffered from the same condition, something her mother had always denied.

“Had my mom told me that, it would have been maybe a little easier for me, I could have asked a little bit more at the time,” she said.

Her advice to other family members and patients? “I find it very important to talk about it. Also, be interested and ask,” she added, referring to both those struggling with a mental health condition and those supporting them.

Simone is now in her second marriage with a man who she says accepts her how she is. She has also learned to be kind to herself every day. If she doesn’t feel well one day, it’s ok to stay in bed.

She is also heading a nation-wide mental health patient organization in Sweden called Balance. Simone said she never saw herself in such a position, but after she got diagnosed and began meeting other people in similar situations, she started understanding the value of building a community and getting support from each other.

The most rewarding part of her job? “People saying ‘Wow, I learned something or I understand something.’ This is the best and it can be over the phone, in a seminar, in a group with a hundred people or 10 people. That’s nice.”